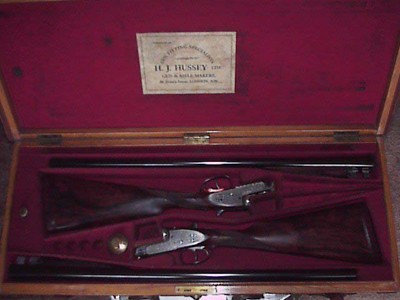 With the rise in popularity of British game guns, one area of interest has only just begun to be explored by American shooters -- the pair of guns. In this article I hope to present some general information on these extraordinary guns.

Why a pair?
To many shooters not familiar with them, the idea of matched guns is odd and extravagant. In truth, there is much to recommend pairs of guns, particularly for some specialized forms of shooting. Prior to the mid-19th century, most shooting was done simply by wandering across fields and through cover, perhaps shooting over dogs and even occasionally shooting from horseback. However, by the 1830's and 1840's a change was taking place. Gentlemen hit upon the idea of having servants walk toward them, driving the game forward, while the guns themselves stood still. It was soon discovered that the weight of game presented by this method was far greater than simply walking up birds. As the single guns were loaded and fired more and more rapidly, they soon became too hot to handle. Further, many shooters were now presented with missed opportunities as the birds flew overhead while the gentlemen and their attendants struggled to load as quickly as possible. The solution was to have two guns and to train the attendants to load while the gentlemen shot.

Types of pairs:
On the whole, pairs are more commonly found in sidelock guns, though a small supply of boxlock pairs is available. Since a pair of guns was obviously twice the expense (and perhaps more), and they were intended primarily for the relatively expensive sport of shooting driven game, most people who commissioned a pair were simply in a position to chose the more expensive option of sidelock guns. Most such pairs are finely finished and beautifully decorated, with many being made in the makers' "best" grade. 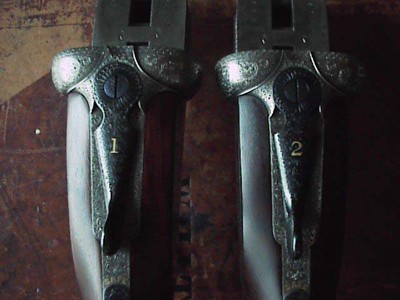 However, by no means did all driven shooters have a fortune with which to pursue their hobby. Indeed, even in the "big days" of shooting around the turn of the century, there were those on a more modest budget who wished to use a pair of guns. Hence the early pairs of boxlock guns seen today. Though uncommon, boxlock pairs continue to be made even up to the present day. Many boxlock pairs, both old and new, bear a minimum of decoration and they are often the product of more large-scale makers. Thus, they continue to fill the void for affordable, more routine, pairs for today's shooters.

Much less common still are true pairs of hammer guns. This is due in part to the fact that hammerless guns have been the standard since the early years of this century. Further, hammer guns were at their peak in the early years of organized driven-shooting and were soon superseded by hammerless guns. Many of the original pairs of hammer guns were separated and given away or sold when the owner wished to replace them with new, hammerless guns. A much more rare variant, perhaps the least common of all types, is the hammer-ejector pair. Built only in a very limited time window near the turn of the century, and only by the best makers, such pairs are rarely seen today. These guns represented the conservative approach to design and appealed to the experienced shots of the day who felt more comfortable with the proven design of the hammer gun, but desired the faster speed of reloading offered by ejectors. Boss, one of the first names in hammer-ejector production, stated that one of their hammer-ejector guns was the equal of a pair of conventional hammer guns fitted with extractors. In an era when enormous bags were held to be the ultimate accomplishment, this was sure to attract customers.

In general, however, most shots with an inclination to shoot driven game and the financial ability to indulge themselves opted for a pair of hammerless ejector guns. Initially, the cost of a new pair of guns was little, if any, higher than double the price of a single such gun. As the years passed, however, labor and materials became increasingly expensive and a premium began to be charged for the commission of a pair, a practice that continues to this day. On the second-hand market, a pair still commands a premium over a good single gun since good true pairs are always in quite limited supply. Premiums range from approximately 10% for a new pair from the maker to 20-30% in the open market for a pair of top-quality guns in exceptional condition. 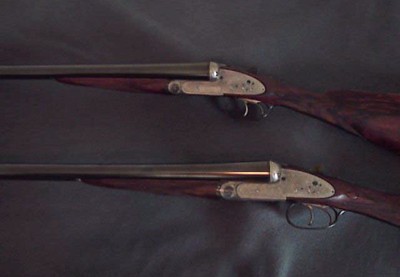 On most pairs, with the possible exception of some lower grade boxlock pairs, each of the three main components will be numbered, often with a gold inlay. The action is usually numbered on the top of the loading lever, the fore-end at the latch-button ferrule, and the barrels on the top-rib near the breech.. Occasionally, one will find plain-grade boxlock pairs that are engraved (or even stamped) with the "1" and "2" on the watertable of the action and on the underside of the fore-end iron, this being the limit of their numbering. Occasionally, and more so in recent years, one will see guns with consecutive serial numbers, identical configurations, and yet no numbering. This is usually true with machine-made guns or those finished for retail stock. While these guns are often used as a pair, they are not as desirable as a pair of bespoke guns.

What makes a pair special?
For optimum usefulness, is essential that each gun in a pair be essentially identical. The guns must be matched not only in overall weight but in the weight of each major component. The balance and feel of the guns should not differ in the slightest when the guns are handled. Hence, when one of the guns in a pair is in need of a major repair, such as rebarrelling, is very important that the work be carried out with the greatest attention to the handling characteristics of the other gun. Needless to say, the stock dimensions should match exactly. Since it is very difficult to match the densities of wood, particularly when the stocks are many years old, the re-stocking of one gun in a pair can severely affect the gun's weight. Similarly, unless rebarrelling is done by the most skilled craftsmen (preferably the guns' original maker) the balance can be lost. Even the often neglected trigger pulls should be checked to be certain that they match.

Often lost in terminology is the actual designation of a pair. A "true" pair is just that, two guns ordered together from the gunmaker. A "matched" pair, however is not really the same as a "true" pair, since one of the guns was built later to match an existing gun. The original gun may not have the number "1" added to its components (in which case it forms a "composite" pair), so one should be very thorough in examining a pair in which one gun is unnumbered. It is not unknown for a single gun to be sold as the mate to one that was not really made-to-match. Further along these lines, a "composed" pair is actually an existing "2" gun which has had a new "1" gun made later to replace its lost mate. One will, however, occasionally find two single guns with similar features described as a "composed pair". There is some question as to whether or not is this technically correct but it may offer an excellent introduction to shooting with two guns, providing the price reflects the discrepancy.

Form and style:
Because pairs of guns became popular early in the breechloading era, a great many will be found with the traditional barrel length of 30 inches. A few guns may be found with even longer barrels, holdovers from the days of very long-barreled percussion guns. As powder efficiency improved, less length was necessary for complete combustion, and the common lengths of today became popular. As a rule, early pair-shooters appear to have preferred the 30" barrels, though guns made by Woodward are very often 29". Shorter barrel are rarely seen in guns built before the turn of the century. Perhaps the most popular of all barrel lengths, the 28" took the lead in popularity from the 30" early in this century. Still shorter barrels, such as the 27" associated with Rosson's of Norwich and the 25" made famous by Churchill, are usually found on guns built from the 1920's on. 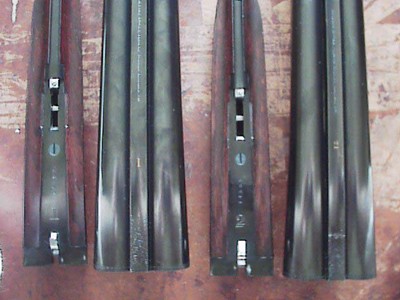 In the matter of choking, there is some division of thought among experts. Many claim that the chokes should be identical from gun to gun. A few even go so far as to say that the chokes should be identical in all barrels, though this can limit the number of shots that may be open to the shooter, particularly if the choice is made to go with more open chokes. Guns made prior to the late 1870's are often found bored true cylinder (no choke) in all barrels. There are those, however, who suggest that the two guns may be bored with quite different chokes in each of the four barrels. Common recommendations for this are: #1 gun - Improved Cylinder/Modified, #2 gun - Improved Cylinder/Full (or Improved Modified). This option gives the shooter a wide range of available chokes for any given shot, particularly if the shooter often uses one gun singly. On the negative side, it can be very confusing for an inexperienced shooter/loader team when used as a pair.

As a rule, the ideal stock configuration of a pair is the classic combination of straight hand and splinter forend. The straight hand, itself a descendant of the older "hand-rail" hand, lends itself very well to driven birds as it holds the head low to the comb and enforces a slight upward tilt, which translates into a bit of lead on incoming, overhead birds. Guns will also be found with half-pistol hands or with a Prince-of-Wales hand, which differs from a half-pistol only in having a capped base and generally a slightly more shallow angle. Full pistol grips and wide beavertail fore-end are relatively rare on pairs of guns, generally being reserved for single guns of specific use (such as live pigeon shooting).

One of the more interesting, if neglected, aspects of pairs of guns is their casing. Best guns from the best makers will usually be cased in oak and leather. In this, a heavy frame of oak is covered with thick leather and fitted with brass corners. The interior of the case is lined in baize (usually green or red) with the polished oak separations being uncovered. To protect the surface of the exterior, these cases were often supplied with outer travel covers of mail canvas. This is the most sturdy of pair-cases, but it is also the heaviest. For this reason guns were often supplied with a more convenient case, usually of lighter wood covered with stout leather or the ubiquitous 'canvas and leather'. With some gunmakers, (Boss, for example) the serial numbers of the guns are stamped on the case interior near the hinge. This can be useful in determining whether or not the case is original to the guns. Often the exterior of the case will carry old rail or steamer labels and, occasionally, the name of the owner will be embossed onto the lid. All of this combines to add to the attractiveness of these relics from the sport's golden age.

(Except for posting strictly limited to "www.doublegunshop.com", all rights reserved by the author.)