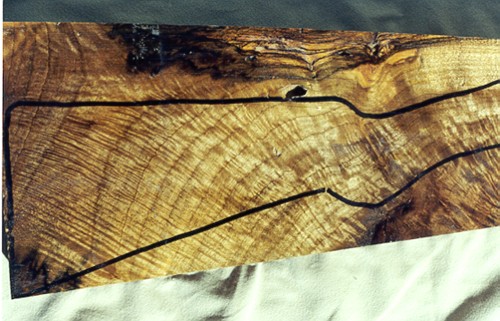 There are many fine gunstock woods and although walnut is not the best, it will certainly do. The three most readily identifiable kinds of walnut are American black walnut (Claro on the West Coast); English walnut (aka French, Circassian, Moroccan, Italian, Himalayan, American English, etc.); and Bastogne which is a hybrid between English and American black. To further complicate matters, the University of California at Davis has identified over 100 varieties of walnut and has a test orchard with something like 114 varieties. Tree harvesters generally classify the tree by its nut rather than the wood which can overlap in look, color, density, and other properties.

Walnut is like people. There are good and bad in every variety and from all locations. Properties and "look" also overlap. Even two trees side by side and grown from nuts from the same tree may look and have completely different properties. Judge each piece as an individual and ignore what any "expert" tells you. I've seen fast growing Claro denser than slow growing English. Bastogne is the fastest growing and also the most dense of all. I know of a 15' diameter Bastogne tree that is only 100 years old. Your own personal preference for beauty decides what is best as long as the individual piece is "fit for function". It must have proper grain structure in critical stress areas.

American black walnut is the wood of choice of all of our American classic shotguns. I have seen very little, if any, English walnut on these guns in the field grades (even though they look good with it). It has more of a reddish tint than English and is much more often found with pretty figure such as fiddle, feather crotch and burl. In fact, I don't think I've ever seen burl in English except near a graft with Claro. Claro walnut is American black walnut grown in the West. Claro grows faster and generally comes from larger trees than its Eastern cousin. This is an advantage as the better wood generally is added on after a tree reaches three feet in diameter. Larger trees also yield wood with thicker feathers which means less "one-sided" gunstocks. Claro is also more colorful than its Eastern cousin with more brilliant reds/yellows/greens/purples. Sometimes it is less dense than its eastern cousin. Sometimes it is MORE dense than its Eastern cousin. Again, judge each piece individually. As a general rule, seedling trees are more dense than their grafted counterparts. English walnut is often grafted upon Claro rootstock and the resulting gunstocks that exhibit the best properties of each are amongst the most magnificent of all gunstocks.

English walnut is generally known to be hard (not always) and the best of it has beautiful dark stripes and/or "mottling" (marble cake). MOST English trees exhibit little, if any, black lines, unfortunately. Rare pieces also exhibit feather and/or fiddle. English walnut is the current walnut of choice of the professional stock maker (where 30 years ago you could not GIVE English away). Professionals extol its properties far beyond its actual virtues. The reason is because of its "workability". For example, you can often take a knife and run a long curl along a sharp edge of an English blank. Claro and Bastogne will result in short, broken curls. This makes machining/scraping/checkering English much more enjoyable. Stock makers will push you towards English due to this ease of working. Forget the "harder/denser" baloney you will hear. You can find Claro and bastogne just as hard. Pick the wood type you prefer, then pick the individual specimen.

Another form of English is Circassian walnut. Actually, Russian Circassian is all but gone. What is often described as Circassian is actually Turkish English. It is inferior to Circassian but you would not know it from the asking price. It has a darker general appearance because most of it has been "steamed" to darken it. This also gives it a "muddy" or "smeary" appearance. Unfortunately, it OFTEN has voids which may ruin it. Luckily, voids in non-critical areas can easily be hidden with good woodworking techniques. However, Turkish is so expensive, you should always demand a written guarantee that you will have a finished gunstock "fit for function" with no voids in the wrong place. The term "overpriced" comes to mind.

Bastogne is a cross between English and American black walnut. It has also been called paradox and bastard walnut. It is generally the most dense of all walnuts. It often has a greenish color cast and also often exhibits broken fiddle pattern. Even though dense, it can grow EXTREMELY fast. A friend will soon be cutting a 15' diameter tree. That is about 50' in circumference and it is that size even 10' off the ground. 100' from the base of the tree a branch is 3' in diameter where it touches the ground! This tree is only about 100 years old! Some Bastogne is too dense to make proper gunstocks. Although denser than English, the workability of bastogne is more like Claro than English. Both English and Bastogne may appear as light as maple. Note that there is a vast difference between this and true sapwood.

Fiddle is a pattern consisting of parallel lines usually perpendicular to growth lines. Feather is self-descriptive. It is the most valuable of all the patterns and may appear with fiddle. It is formed in the crotch of some trees. Fiddle is the strongest of the patterns. It is OK in a wrist area. Feather and burl are not recommended in wrist areas unless it is a through bolt stock like a Ruger #1 or a Browning O/U. Burl has become very expensive in recent years with prices hitting $500. for fine blanks. They were given away at one time. Decent fiddle starts at about $30, nicer at $60-$75. The finest may go $150-$200. Feather will start at about $75 and hit $250 and higher in Claro. Add about 50% for bastogne. English will start at about $20 for plain walnut . It will be $200-$300 for really nice two-piece stocks but will go to $500-$750 rather quickly for exhibition. I have seen mottled feather one-piece stocks go for $1500. Double that for Turkish.

All suppliers will send photos or videos. Videos give the most accurate color rendition. Don't pay more than you have to. There are a number of excellent West Coast suppliers and you can e-mail me for suggestions.

Forget about carving it yourself! There are numerous people out here who will cut it out for you. An example is Richard's Microfit who has been in business for about half a century and has about 4000 patterns or can copy yours for maybe $65 or so. You will get a 90-95% fit which is adequate for some guns. However, for guns like LC Smiths, the inletting is CRITICAL and must be perfect. I suggest finding someone with an Allen or Hoenig machine. The Hoenig with the correct operator can reportedly hold 5/10,000 inch tolerance. They copy your or their pattern then glass your metal in. They then copy the glass inletting on your wood. The result is a press fit! The cost is usually $250-$500. and is money well spent.

Fine walnut blank at perhaps $150 plus $250. for inletting and you finishing yields a magnificent gun which can either be a family heirloom or at that price, you can even make some money.

My 5 GHE and DHE Parkers have about $30 wood. My 4E Ithaca has $60 wood. My Crown/Monogram and Deluxe LC Smith have $100-125 wood. You can have a gun that blows the BEST quality American shotgun stocks away. The feather Winchester guns will be the only ones that can match you.

Have fun and feel free to contact me with questions on suppliers, inletters, or any other questions regarding wood. I shall be adding a piece on stock finishing soon.