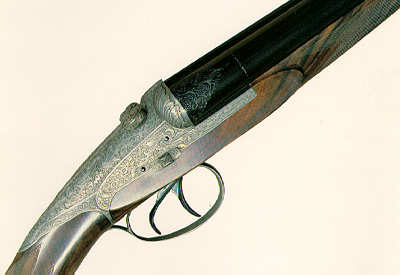 - The Darne Shtogun -
by Yves Butel

In 1881, a gunsmith from Saint Etienne, RÕgis Darne, patented a new basically different type of shotgun. It has a fixed barrel and a rotating breech system : the C model. By pushing the top lever, the breech block rotates 90 degrees on the right and gives access to the chambers (it doesn’t have ejectors). C models were available in 3 grades : C2 to C4.

In 1897, appeared the first famous sliding breech system that we know today. Improved years after years, it was a real commercial success and Darne shotguns won a lot of golden awards in gun shows and shooting competitions.

The first models had half block barrels, but after 1902 Darne used a new process to fit the barrels together:
Tin soldering (at 250¯ C) and a Frette (mono-bloc) that holds the chambers. In fact, it was shown that the usual process of copper soldering (1000¯ C) for half block barrels can damage the temper.

There is four models of sliding breech guns : the Halifax, R, P and V models. They all have automatic ejectors and reinforced butt stock by a wood screw inside the grip.

When the gun is finished, another proof test is performed:

Halifax Series:
Three grades : type 3 (3 PM) to type 5 (5 PM)
Upper barrel bolt from type 4
Proof : X for type 3, XX for type 4 and 5
Safety lever
Wood in one piece one certain models (forearm+stock) depending on the year of fabrication

The A Series (swiveling breech system):
It looks like the R series except that it has a top lever as on a classical SxS.
The opening is done by pushing the lever on the right and pulling the action 180 degree towards the shooter.
Three grades : A8, A8b, A9
One PM for A8 and A8b and two on A9
Ejectors on A8b and A9