doublegunshop.com - home
A friend made me this tool. Anyone know what it is used for? 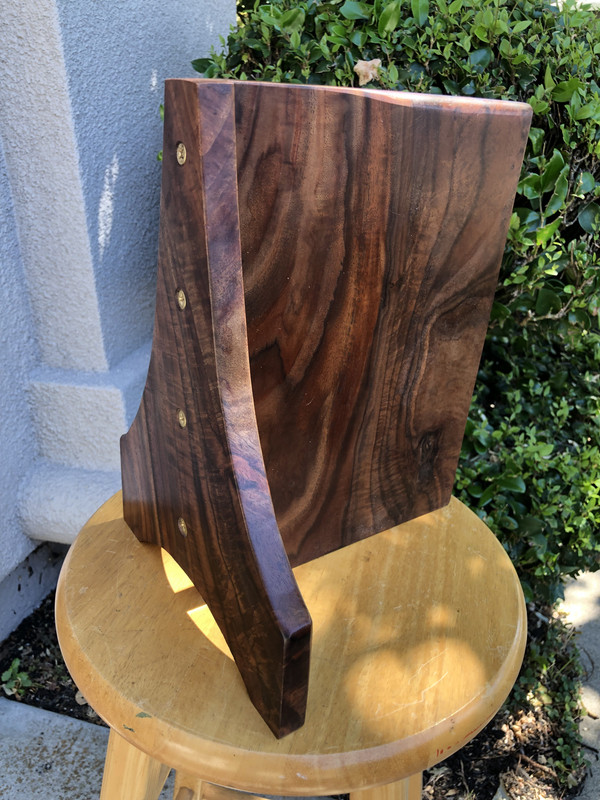 I have no idea, I just wish I had a double gun stocked with that piece of walnut.
JR
Balance to determine gun’s Center of Balance?
Looks like a Henway
The part being screwed into appears to have a varied thickness.
Old colonel is right, it is an edge for finding the balance point on a gun.
Congratulations! to "Old Colonel" for the correct answer. The varied thickness of the top edge is to accommodate a variety of action shapes. Just thought it would be a cool addition to the gunroom.


About 2 pounds, minus feathers.


I’m here all week; try the veal.
The balance tool in use. W W Greener with damascus barrels, balance slightly ahead of the pin. 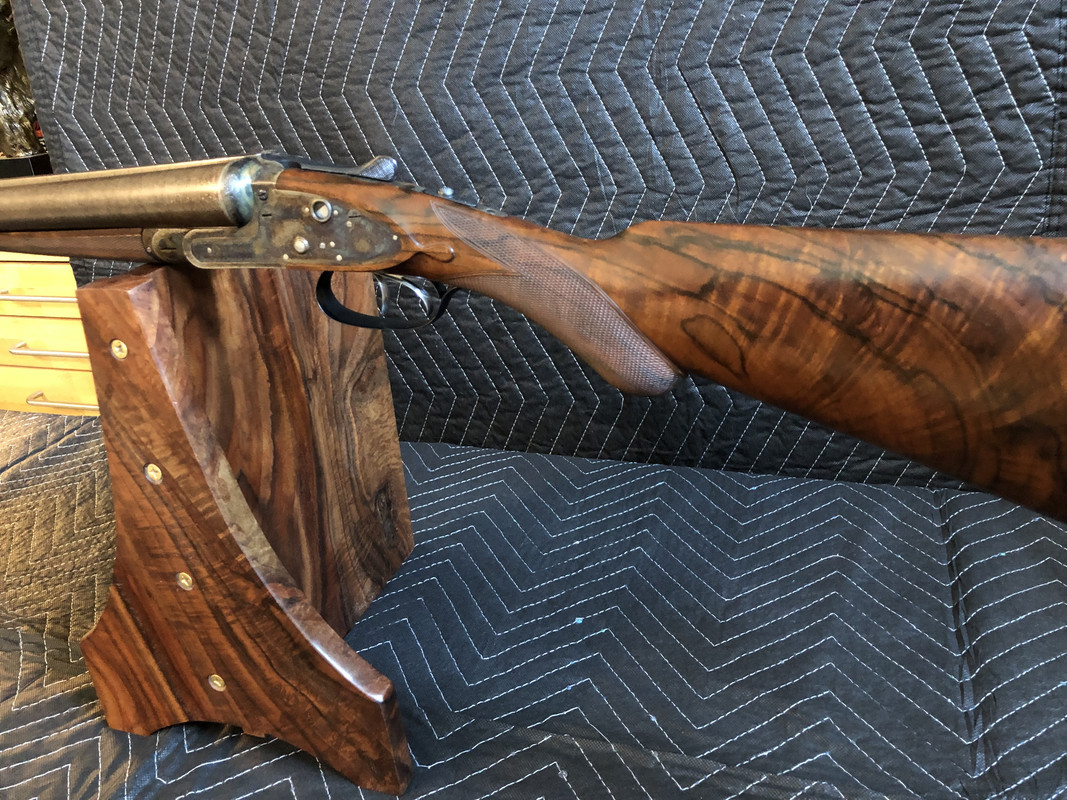 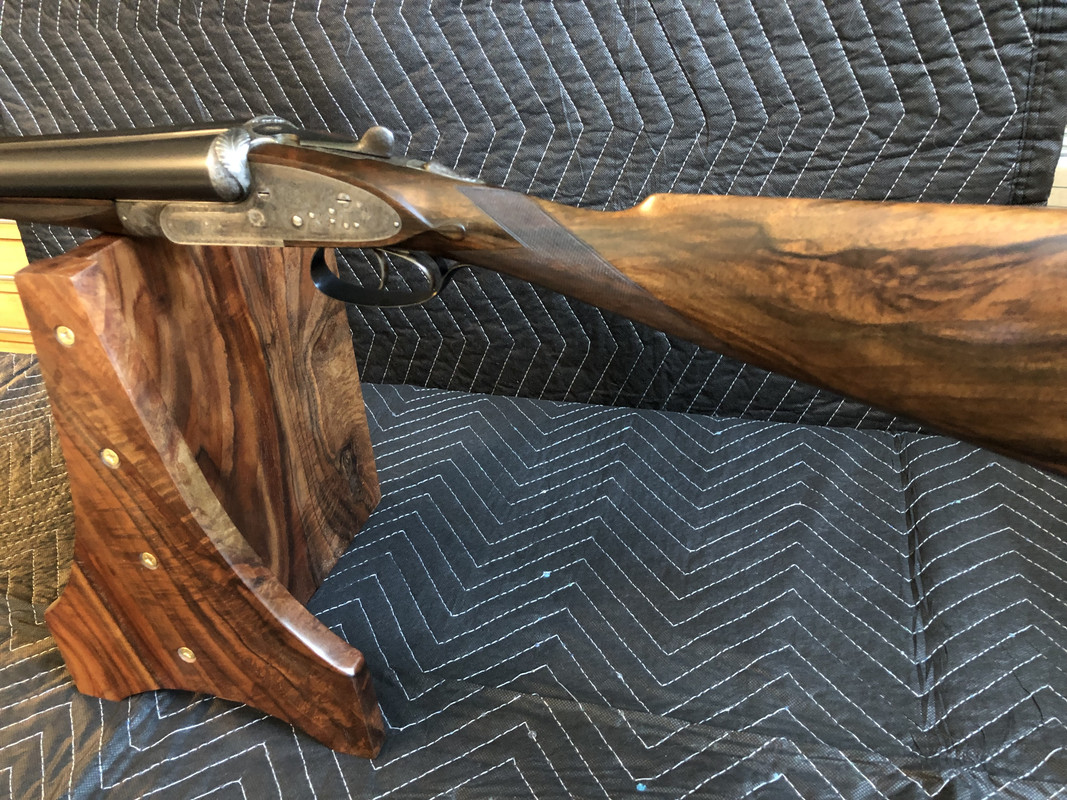 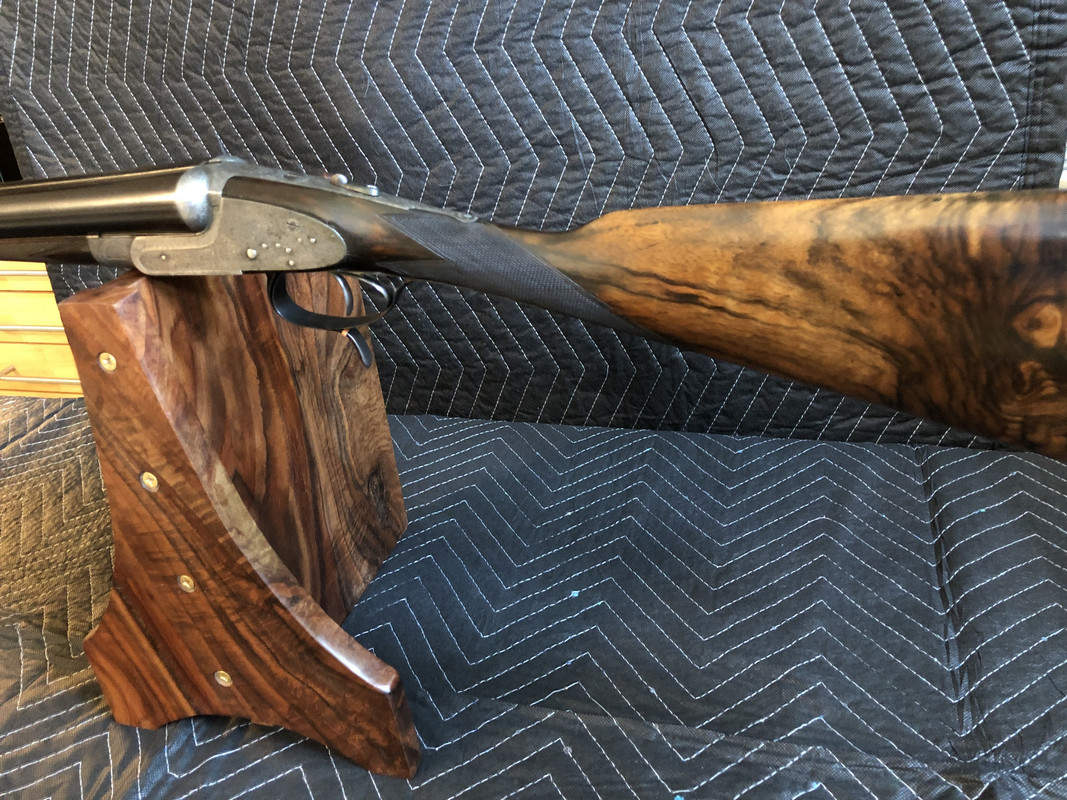 upload pictures online
There is nothing "magic" about having the balance (center of gravity/CG) at or near the hinge pin. Relating/referencing the CG to the (front) trigger does make sense as the trigger must be pulled to fire the gun. Therefore, one hand must be located so as to allow finger contact with the trigger. Normal guns are stocked so that the trigger hand is to the rear and the other hand is placed to the front. The location of the hands relative to the CG determines the % of the gun's weight held by each hand. Said % is a personal preference. I have measured guns with up to 1 7/8" difference in length between the hinge pin and the trigger. Ergo, referencing CG to the hinge pin is not a useful piece of data.

That is one snazzy balance fulcrum; material, design, and workmanship clearly place it among best work tools.

How does one use balance information? Find a gun that suits you - you feel no urge to relocate your front hand from where you initially placed it ( your natural hand spread). Balance the gun over a fulcrum/pencil/finger (extended finger is only slightly less accurate than a actual fulcrum) and measure distance to trigger. And that length is your preferred balance location. It doesn't mean that is the only dimension you can shoot. But, just like stock fit dimensions, the further you stray from that dimension the more difficult it will be for you to shoot well or enjoyably.

I cannot ever recall seeing a Greener retailed gun made by another either.

Interesting....
Steve, Greener and Scott developed a close working relationship and I think it was not unusual for Scott to supply either finished guns or “in the white” parts to Greener. Of course Greener was eventually absorbed into Scott who continued for a short time to offer Greener marked guns to the market.
© The DoubleGun BBS @ doublegunshop.com