MORE PHOTOS NOW POSTED.
WW Greener's father built guns marked William Greener.
Gil, even the original is too small to show detail. Nice looking gun though. Those hammers sure look percussion and the angle they strike also looks like they were made for percussion caps on nipples.

[quote=Joe Wood]Gil, Those hammers sure look percussion and the angle they strike also looks like they were made for percussion caps on nipples.

Hard to see clearly but could it be a converted pin fire?
Original pin-fire. Steve Nash will be happy. With that pistol grip, wonder it if were originally a rifle, explaining the short barrels. What's the weight? Look at the drop - old school.
Looks like an original centre fire breech loader to me. The hammers are of typical characteristic Greener form, to be seen on the guns of W Greener percussion muzzle loaders and WW Greener early breech loaders before change to the later characteristic shape. Similar hammers to those pictured may be seen on Pape guns so perhaps it was a feature of the Newcastle gunmakers.
You are right....flash guard is behind the hammers - unclear photo and inattention.
On second thoughts, this may well be an interesting gun, based on the description of the markings.
W Greener was a dyed-in-the-wool proponent of the muzzle loader and held strong views against the breech loader, and was disinclined to build them.
WW Greener, son of WG, was apprenticed to his father's firm, but held opposite views, and very much favoured the new system. I believe that WW , in association with a brother, marketed a few guns under a London address, under the Greener name. Presumably WWG would have had these guns constructed by outworkers and then sold on as a back door business.
WG and WWG parted company on ( I believe acrimonious terms) and it may be that the sons' side dealings brought things to a head. The old man would not countenance guns bearing the Greener name being sold outwith his own control.
Subsequently WWG adopted a similar stance to his brother J Greener who put out a few guns under his own initiative... and it is reported that WW "escorted" Joseph to the docks and ensured his departure ...westward !!

So- the hammer style of the above gun and the style of maker name and address point to this scenario. Does the gun have a serial number? 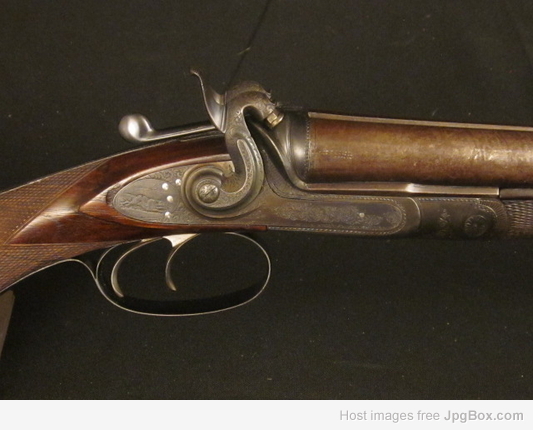 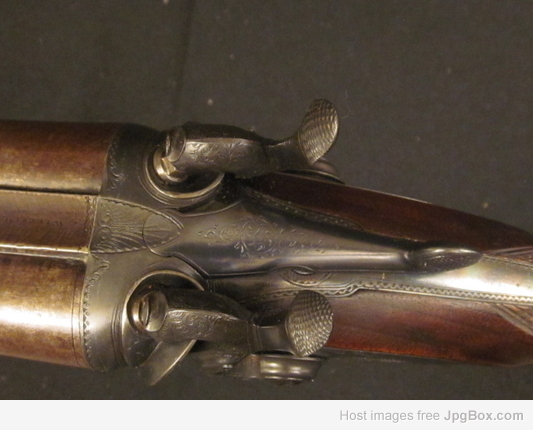 MORE PHOTOS UP. MANY THANKS FOR COACHING ME THROUGH THE PROCESS OF UPLOADING PHOTOS! GIL
SERIAL # IS 557(POSSIBLY 1)6
© The DoubleGun BBS @ doublegunshop.com