Mike
I enjoyed that video, Gil. Thanks, buddy.

SRH
I too enjoyed that.
In this video who is the shorter of the two men---- he is very knowledgeable?
"Simon Reinhold is Head of Operations for Holts Auctioneers, Europe’s leading specialist gun auctioneers. He is a specialist game shooting coach, and a writer on firearms, shooting and rural issues." Gil
Mucho enjoy, Gil, thanks!
He posts regularly on a couple FB SxS groups.
If you go to YouTube you will find the channel this is on. Many interesting videos to watch. He deals with guns at the Holts Auction, new steel shot loads, bismuth loads, great values in guns in his current market and general shooting issues. Look for TGS Outdoors.
That reinforces that a round body Dickson is really the pinnacle of shotguns. I would love to just see on in the flesh one day.

That is one of the better YouTube channels for sure. I've enjoyed many of their videos.
What Simon says about the round action is true, particularly with regard to the weight lower and farther back as compared to a sidelock. Also, your hand just fits so nicely around the action—it is if the Dickson was meant to be carried. David McKay Brown has replicated and indeed improved the round action and I was surprised he was not mentioned in the video segment. Although I understand that David is retiring, his guns represent an enduring legacy capping the round action saga.
Pair of Dickson Round Action guns are for sale on Morris Hallowell website. Photo below does not show the new modern steel barrels made by another in the UK some years ago. Dollars to Dave if a buyer mentions my name to Morris. 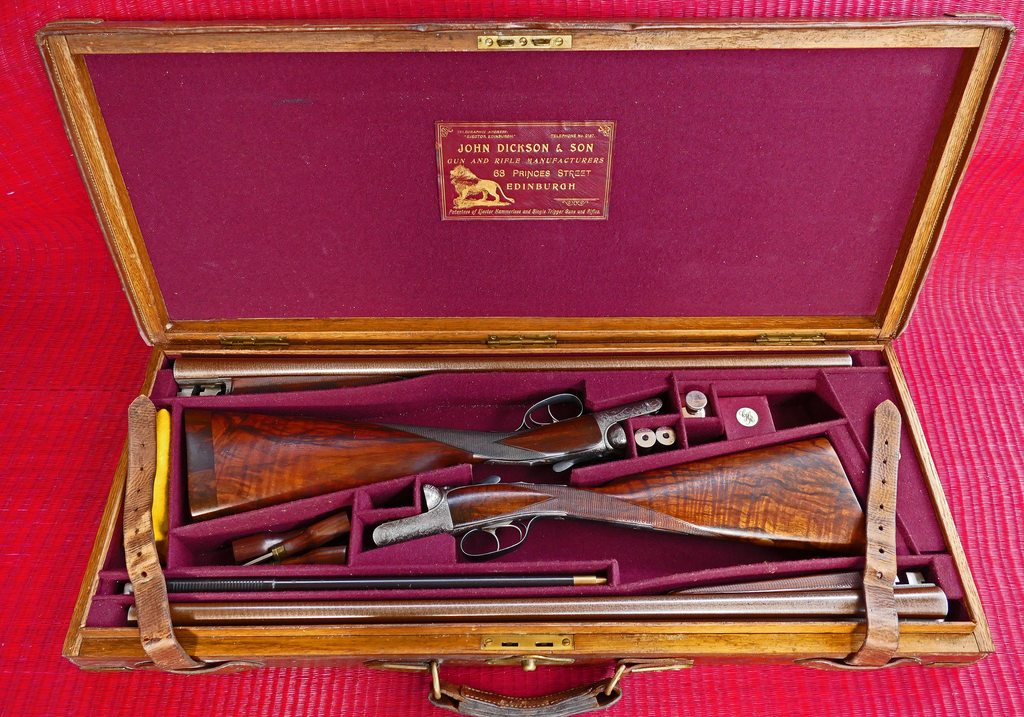 A friend and teacher of mine had a pair of dicksons that is as close as I will get mc
If you typically shoot a target o/u, the R/A’s will test you.

Whatever your left hand is doing, the gun is doing.
I have a Dickson RA that was made in 1943. Original through and through. I have a hard time getting control of it when shooting clays. It is choked IC and Full with 28" barrels.
Less than 2K ever made.
Beautiful guns.
Great video. We had several Dicksons and even a few McNaughton's come through the MW Reynolds shop in my time there. They clearly have a cult following. The nicest one of the several that I got to handle was a Damascus-barreled Dickson, and it was indeed spectacular. Several were project guns that had been either re-barreled or sleeved (and they didn't handle with such alacrity because the tubes hadn't been struck down properly). They're all getting pretty old now and most were very well-used (and for all the obvious reasons). I'd love to have one to use for a season or two to see if that magic would work for me, but even in less-then-wonderful shape they still command a fairly high price tag. Other, lesser guns can have that magic as well and don't command such a stiff entry price.
I shot a few drives in Scotland with the RA, and a couple drives on pheasants in Yorkshire with the RA ultralight. (only a few of the ultralight’s were ever made, the forend is about 4 inches long, kind of like a miniature beaver tail)

They really are naturally pointing, and are designed for essentially pointing that bird out of the sky with your left hand.

That’s not how most Americans shoot.
My Aya #2 16 has 2 lb. 10 oz.-30" barrels and she's a demanding little witch. I'm still on learning curve with it, but my next approach will be inserting in front and letting her "fly." We'll see.
I was able to handle the guns Mr. Cooper mentioned. They left a lasting impression about the quality and the magical way they mounted and swung. From then on I have compared the handling of any sxs to that moment I had the honor of handling those Dicksons.
Just reach out in front, the gun will follow.
Also to mention, Dickson had a direct connection to Boss & Co., Jack Sumner did a lot of engraving for Dickson as well as Boss installed their own single trigger in the Dickson guns.
I shot a friends 20 ga with 29" barrels today and it was magic, if I just followed the move mount shoot method. Hard to track a high bird very long, but if you make yourself just mount and fire it was awesome. It is for sale on gunsinternational only $42500
© The DoubleGun BBS @ doublegunshop.com