doublegunshop.com - home
An old friend from the '70s passed away last Friday. Don was a hunter and gun collector from the beginning. His article in American Rifleman in 1972 on double guns, mostly American, contained a chart that compared most quality American makers, grade for grade. The article pictured some nice guns, including a AA Grade sideplate Lefever and a 6C Crossbolt Lefever. Some men still carry that chart in their billfolds. He was one of the first contributors to the Double Gun Journal. Don was a quiet, unassuming man, and was the best wingshot I ever hunted with. A Favorite Photos post on this bulletin board showed him just after getting a double on Huns while in his 80th year. I, and a lot of others, will miss him.
That is indeed very sad news Daryl. Like you I remember that old American double gun makers grades comparison and still refer to same from time to time; but the first thing I always recall about Don is the article he wrote for the DGJ (Volume I, Issue 1) entitled "Lesser Lights" in which he featured a D Grade Baltimore, a high grade H & R, a graded Tobin and Stevens, and an A and D Grade Syracuse (I've always assumed the D was your gun). I later corresponded with Don and purchased the A Syracuse; a well-used specimen with an after-market beavertail, but found Don to be a gentlemen in all respects and very knowledgeable. He will certainly be missed, but the reality is that all of us old-timers are slowly heading in the same direction; and once the time comes that we're gone, about the only lasting thing we'll leave behind is our respective reputations. Let us hope that personal legacy will be as well remembered as Don's.
I'll reread the DGJ article today. A real double gun guy. I hope I get to enjoy mine as long as he did his.
Well, respected reputations and the knowledge that was shared in print and online.
I only knew the man through his writing. We shared interest in a similar topic.

One more pen and voice, stilled.

Best,
Ted
Don accompanied my son and me to several Las Vegas shows, and he always stopped by to say hello when he was in town. He was full of interesting stories and a fund of knowledge. Our hobby has lost a good and dedicated friend.
Sorry to hear. Don first appeared on my radar when I picked up a 1986 Gun Digest. I read his article on Ansley H. Fox on the flight from Kodiak back to Northern Virginia that year. 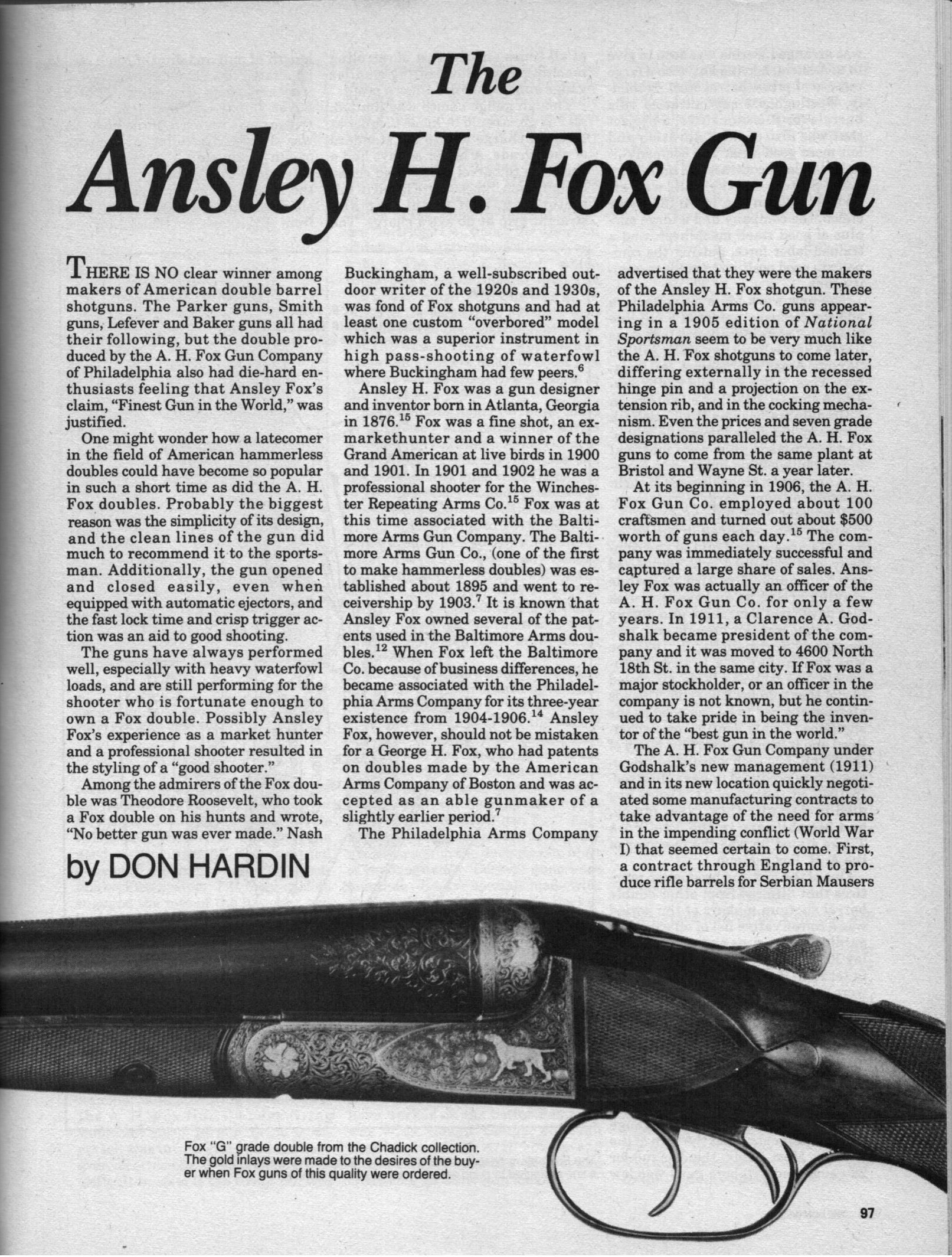 Certainly enjoyed chatting with Don at the Nimrod Classic events at Big Sky Sporting Clays at Polson, Montana, and the winter Las Vegas shows.
'Thanks' for letting us know of this, Daryl, and I'm most sorry to hear of his passing. I always enjoyed the chance to visit with Don and Shirley at their home on Bell Crossing, or at the local gun shows where he'd be displaying some of his pieces. He had a passion for his hobby that just bubbled over whether he was showing you a nice gun of his own or looking at one belonging to another.

I know you were very close to him over the years and shared a lot of bird hunting camps throughout Montana. My thoughts and prayers to his family and friends as he will be missed by those that knew him well.

Rob
Here's Don with his Hun double in his 81st year in 2012.
He was the best wing shot I ever hunted with. 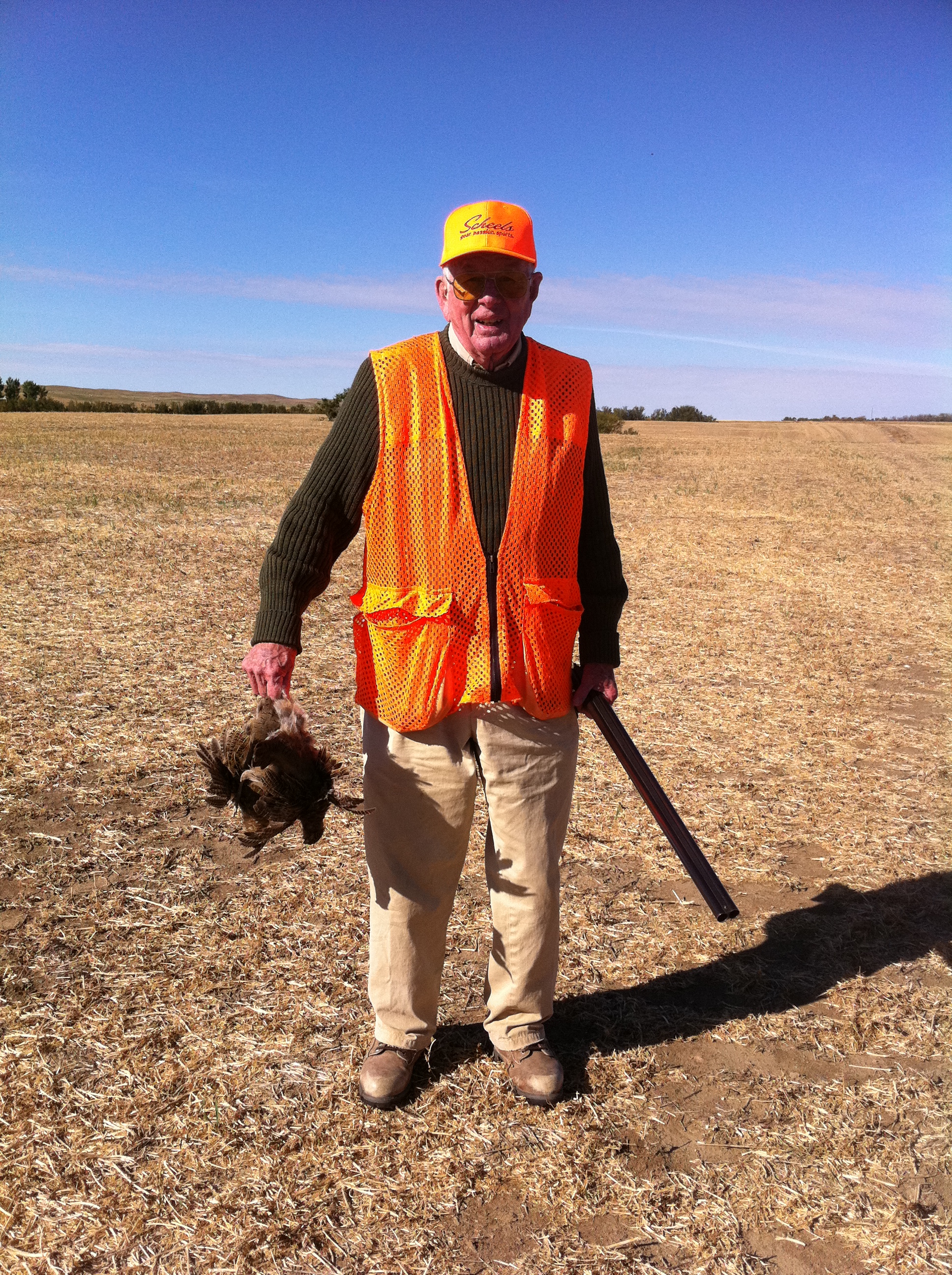 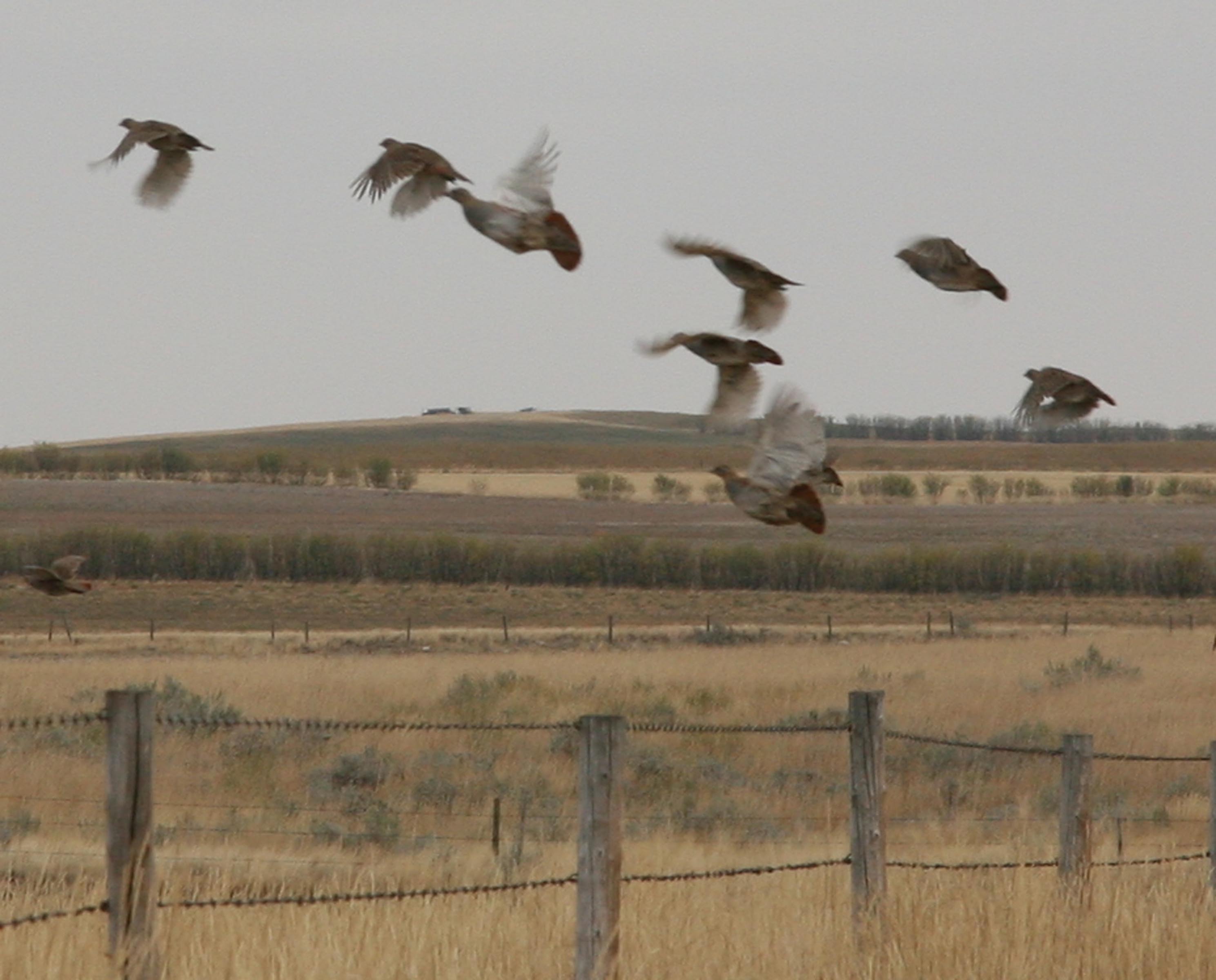 I'm sorry to hear of Don's passing. Over the years we fairly traded some nice side-by-sides, I still have one of his reloading presses, and his participated several times in sporting clays shoots organized by the Big Sky Upland Bird Association. I reviewed our records, and while he never took the top trophy, he usually won the SXS class. He sold me a well used Parker 16 that we worked together to refresh that remains one of my favorites. He also built a lovely bamboo fly rod for me. Quite a talented yet humble gentleman.
I hunted huns with Don and Daryl when Don was only 80. He was a great shot, great company, one of the nicest people I have been lucky enough to spend time with. I have the very best memories of shooting birds and shooting the breeze with him - a truly wonderful person.
I never had the pleasure of meeting the gentleman in person and only knew Don vicariously through his writing, this board and probably the old board. He will be missed by his friends and his readers but not forgotten.

My condolences to his family and friends.

May he live on in our memories
Gentlemen -

Thanks for your kind words and memories of my dad. And a special thank you to his good friend Daryl for the love and respect you always showed him.

Here is a picture from his last hunt (a dove hunt in Lubbock TX) where he still had me shagging birds like I did 50 years ago!!

Tom Hardin
Tom, here you go with the pictures you wanted posted. Thank you, Daryl 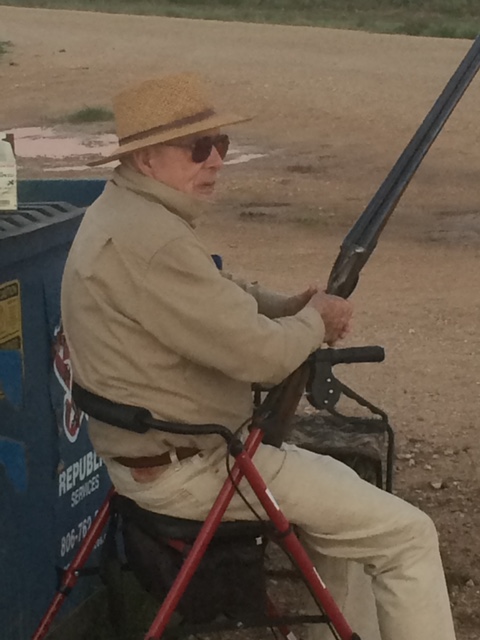 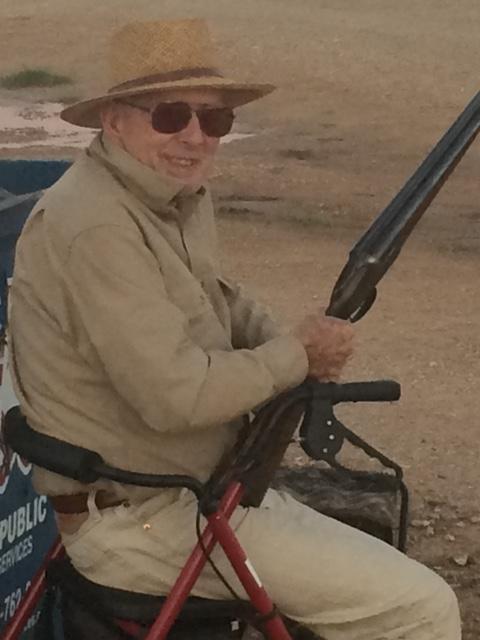 Sad reading of his passing. Never knew the gentleman, but would have liked to. He does leave a fine legacy from having touched many a person who never had the pleasure of knowing him personally. That's saying a lot in this day and time. God speed to him and His blessings to those left behind to adjust to the loss and smile w/every memory.
I had the Honor and the Pleasure of hunting with Don and Daryl on the great plains of Saskatchewan some years back. It was one of the best trips I have been on, in my long life. Go with God, my old friend.....
I use a “Hardin Crimp” when loading short shells. Basically this means cutting down the hull and using an overshot card to fill the gap at top. Does anyone know if Don was the person that this is named for?

It is always sad to see a fellow SxS enthusiast pass.
I can’t tell you how many times I have refered to my copy of his American shotgun grade chart. RIP
Don Hardin had interests in more than doubles and hunting. He was an avid fly fisherman. When teaching at Texas Western [Now University of Texas El Paso] he would often hike alone into the mountains in search of trout. His home later was near the Bitterroot River. He enjoyed that location. Don had a hobby of making bamboo flyrods. They were well done and he made one for me. After I quit trout fishing, I presented the rod to my nephew who guides fishermen around Jackson Hole. Rod materials are different nowadays, but my nephew enjoys using a bamboo rod on occasion. He described using Don's bamboo rod like driving a fine vintage car.
Or- taking a clean double in the air over a solid point with a Boss or Purdey smallbore-- I still a few of my R.L. Winston cane rods, from the early Stoner-Merrick era, a Gary Howells and a pre-fire Leonard. All Steinways. RWTF
Daryl, You are blessed to have such good friends.
It's nice to feel a little more connected to a favorite author.
I never had the opportunity to meet Don Hardin personally; and my first knowledge of Don came from the inaugural edition of the Double Gun Journal and his article therein entitled "Lesser Lights". In this article were a few b&w photos and short histories of several quality makes of the American double gun that never made the "big time" in terms of production and longevity; and among those were photos of a late production SAC Grade A and Grade D gun. A year or so prior to this inaugural issue I'd acquired an early A Grade SAC and was keenly interested in learning more. In the guns for sale section of this same inaugural issue Daryl Halquist had listed a B Grade SAC gun for sale, a gun that I soon purchased. Not too long afterwards I responded to an ad by Don for another A Grade SAC gun with Krupp barrels. This was my first actual contact with Don and I found him to be quite friendly and helpful; and the gun for sale turned out to be the gun he'd featured in his article. When that Grade A gun was received I found the differences between the early and late model SAC guns so significant that researching these guns became a personal quest that still continues. I think of Don every time I begin tinkering with anything SAC related; and although I never had the opportunity to meet Don, I wish I could have. He certainly left his legacy in a variety of ways that will insure he is long remembered.
© The DoubleGun BBS @ doublegunshop.com